Found walking alone and dehydrated after being separated and abandoned from a group of 10 other migrants, whom he believed were all dead.  After hiding under a mesquite tree and hearing the story of how he had gotten lost in the desert, he eventually said, “I just want to go home.”  It was the first time he tried to cross the border and had paid $1500 to a smuggler to take him to Phoenix.  No sooner did we emerge from under the tree and back to the highway, a young Border Patrol agent intercepted us.

Just a quick note to thank you again for helping out with the alien that you found on the side of Highway 286.  I just wanted to let you know the resolution of what happened that day (to the best of our knowledge).

After you left, we had a flyover of the area west of 286 and north of the ranch at milepost 31 by the Arizona Army National Guard OH-58 that was supporting our operations.  Usually they have at least a Borstar agent on board along with the 2 man crew. Approximately 8 agents from our shift and another 4 – 6 from the following shift worked the area that he had told us that the group was at.  Basically, after interviewing the guy, we were able to match his footprints to a series of footprints that were running east – west and back again on one of the ranch roads about 3 – 5 miles from 286 approximately across from milepost 36 – 38.  The alien was asked to step directly next to one of these tracks and they matched exactly in terms of size and pattern;  so it was pretty conclusive that they were his sign.  He had apparently gotten disoriented at some point that night and had backtracked at least twice trying to find his group.  From that point, it is approximately 7 miles due north to highway 86 and even closer to a very popular load out spot at the southernmost end of Coleman road.  From what we could figure from what he showed us;  his group had been pretty close to one of the water tanks for the cattle near the eastern edge of the Baboquivari Kitt Peak area. (They couldn’t have gotten much water from the ones that I saw that day;  and if they did drink it, they would have possibly gotten sick from the fecal contamination). 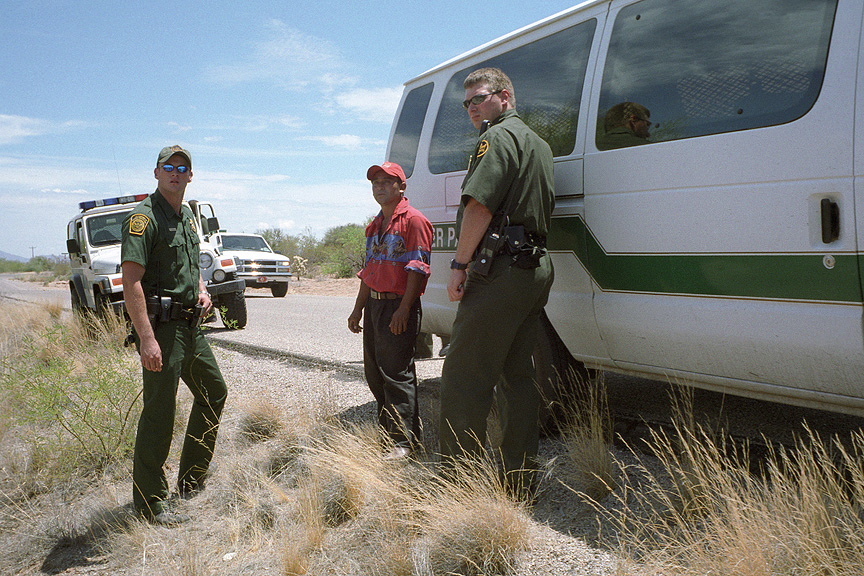 I’ve gotten somewhat familiar with the area myself and if you hug the side of the mountains, it adds a bit of walking but by going straight, you will end up just a half mile or so from Coleman Road.  Coleman is about a 2 1/2 mile long north south road so it is possible to miss it by walking parallel to it;  but even if you did, you would eventually hit the 2 lane east west highway 86.  Coleman is a big load out for aliens now;  in the past MJ backpackers used it too but not too much lately.  Either way, if the group got to Coleman or 86, they got picked up by someone…either smugglers, friendly folks or us.  He didn’t recognize anyone at the station as belonging to his group;  so my guess is that after he left to find water, the others left once they thought that he wasn’t coming back.  Probably the entire time that he had been searching for water for them, they were moving to be picked up on the highway and might have already been in a drop house by that time. 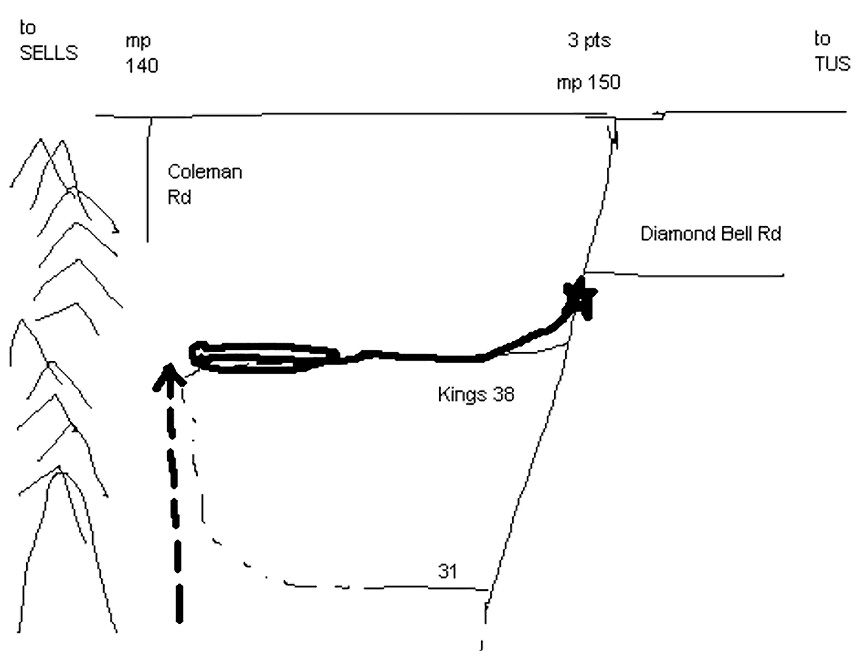 In any event, fortunately, so far we haven’t made any discoveries of any group that size in the 1100 area west of 286 that had died from the heat.  Since that day, neither BP nor aliens have reported any large numbers of dead out there in that area…if there had been reports, we would have heard of this, probably by now.  Unfortunately, the agents in the Gila Bend area did find that group a few days ago with the five aliens that had died.  In fact, it is averaging still about 1 a day throughout the sector. (You do remember how we talked that one of the reasons that there are so many aliens being found dead has as much to do with having more agents in helicopters, atvs, and horseback as it does with the heat and the number of aliens crossing…you don’t really know if some of them have been dead for 10 years but they are all counted in this year’s tally.

It is truly amazing everyday;  today I caught a girl on her 16th birthday.  Her group had left her just 1/2 mile or so in the US.  She was at a minimum, barely past a 7th grade education.  I’m not sure that was one of the reasons that they let her fall behind.  She had a 1 gallon jug of water, a small bottle of pedialyte when the water were to run out, a plastic garbage bag for the monsoons (if they occured), a change of clothes, a hat, some food, and the clothes on her back.  With her inexperience and the distance she would have had to cover completely alone, there is no doubt in my mind whether she might have made it.  She was on the other side of 286 right down near Sasabe.  Basically on that side, there is only the Buenos Aires Reserve road system, Arivaca Road at milepost 12 and a ranch road about milepost 16.  If she weren’t able to make either of those roads to be picked up, or if she stubbornly kept on going when she ran out of water, there isn’t anything till milepost 30 or so.  The saddest thing was that after an interview with the Mexican consulate, she got back on the voluntary return bus to Nogales, Sonora…we couldn’t put her on the airplane to send her back to Chiapas since she was an unaccompanyed minor and the current rules don’t allow us to do that, even though in my mind it would make a lot more sense to get them as fast as possible to their home.  (Of course, there is probably a very good reason that she left home in the first place!).  One common theme that most of these southern Mexicans have is that nobody wants them here and nobody wants them at home either.

Anyway,  I appreciate your thoughtfulness and concern and the help you gave us that day.  A lot of people wouldn’t have stopped. I hope that your projects are going well and that you get a chance to come out this way again sometime.  I wanted to be sure that I was putting out what the best info that I could get about this situation.